Set 2:
Sun Goes Down
Sure Cure For the Blues
Beachhead Dreamer
Bound to Ride
Ohio
Slipjig
Circle of the Moon
Backwoods Rose
Reciprocity

Levels from the SBD were hot for first 3 tracks. Able to get them adjusted after that point.

Reviewer: katzfan26 - favoritefavoritefavoritefavoritefavorite - April 9, 2010
Subject: ed heads never change....
just because they do not sing ghost rape songs or dragonfly every set anymore makes one love mullins for his raw emotions and stage presence over Ed's refined wanna be rock star persona. Like Dave said in the song closure...or man or mouse to those who were at hookahville 25....Ed is just a tinker thinker!

Reviewer: My Name is Nothing Extra - favoritefavoritefavoritefavoritefavorite - May 28, 2008
Subject: Fun Bar Show
A quick listen to Gina, Circle of the Moon or New Orleans shows that buzzed or not, Mullins has got it - and crowd loved it. Not the best show by far, but it sounds like a fun night in strange out of the way venue.

I'll trade Mullins' honest, if dark, growl for Ed's unicorns, lollipops and spacefrogs any day of the week and twice on Sunday.

Reviewer: musicman123 - favorite - May 25, 2008
Subject: Sure was wasted
Some things never.......Mullns was a wreck and it shows in the performance....Booo hookah for taking the easy route and getting a has been back after letting the best songwriter the band has ever had leave the band...

Reviewer: ojhookah - favoritefavoritefavoritefavorite - May 16, 2008
Subject: Smokin'
Wow!!! What a show. 19 min Slipjig, 15 min Reciprocity, Ohio, Circle of the Moon, Beachhead Dreamer, Steeped in Tears, Sure Cure. What a show this. Also, a great recording. 4 1/2 stars. At some points, Sweney is low, but don't let this steer you away. These guys have been on fire since 3/1. Download This!!! 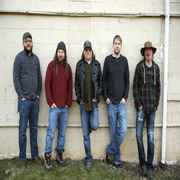